UUMM would like to welcome and congratulate two new U.S. Army Chaplain Candidates! 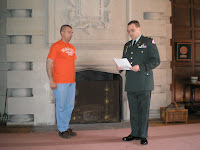 Second Lieutenant James White is a student at the Meadville Lombard Theological School. He was sworn in as a Chaplain Candidate by 2LT David Pyle, in a ceremony at the serminary. James is a prior service Sergeant/E-5 who has served in Iraq and Operation Iraqi Freedom. Prior to coming to Meadville, James was on active duty at Ft. Hood, TX. James is a graduate of Oklahoma State University. James is a Army Reserve Chaplain Candidate.

Second Lieutenant Luke Leonard is a student at the United Theological Seminary of the Twin Cities in New Brighton, MN. Luke is also an Operation Iraqi Freedom veteran, having served in Mosul with the Iowa National Guard. He rose to the rank of Staff Sergeant / E-6 prior to his commission. He also served on Active duty in Seoul, South Korea. Luke is a graduate of the University of Iowa. Unlike James, Luke is a Minnesota National Guard Chaplain Candidate.

We welcome both of them to UUMM, and to the largest young adult ministry in the world! 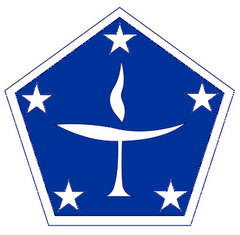 Welcome to the new home of Military Ministries for the Unitarian Universalist Association! This website serves as a way for Unitarian Universalist Chaplains, the future UU Committee on Military Ministry, and UU Military Chaplaincy Candidates to share information with our movement of religious liberalism about issues relating to UU'ism and the military. To Read The Full Article, Click here You can contact UUMM at uumil@uublog.org

If you are considering a calling to Military Chaplaincy as a Unitarian Universalist Minister, Please Click Here to be connected to the Process and Policies of Endorsement and the Committee on Military Ministry.

Join "UU's in the Military"!

If you are a UU military veteran, servicemember, family member, or DoD employee, and you want to connect with others, please visit the "UU's in the Military" blog and forum.

Though there is a long history of Unitarian and Universalist chaplains serving in the military, there are very few such chaplains right now. The reasons for this are varied, but the need for liberal religious chaplains in our military is greater now than ever. If you are considering a call to the Unitarian Universalist ministry, consider if that ministry might not be found within the ranks of the military. To learn more, click here.

About Unitarian Universalism and the Military

Just as there are many different ways in which all Unitarian Universalists find connection to our liberal religious faith, there are also many different reasons why some UU's find their vocation in the Military. These are a few of the more common answers to this question. Click here to read the rest of the article.

Would you like to be in your Sunday morning coffee hour with a UU Military Ministries Coffee Cup? Or perhaps you would like to show your support for UUMM at GA with a button or a polo-shirt. Well, all of this and more is now available, at no mark-up, from the UUMM Cafepress site. Show your support for UU Military Ministries! Click Here to find out more!